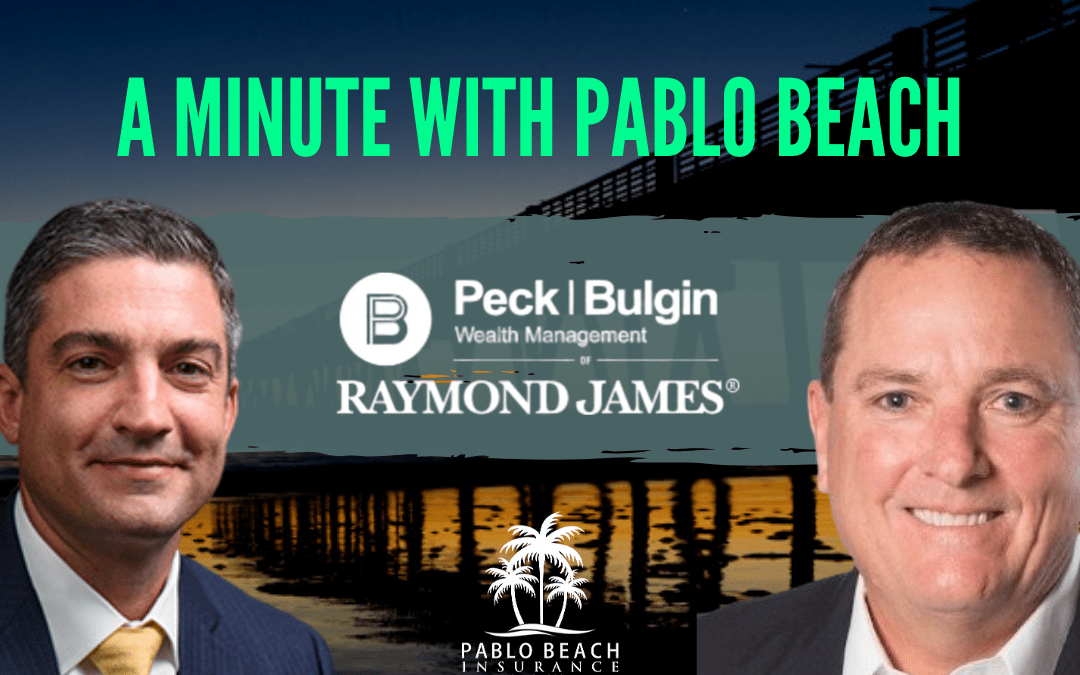 “A Minute with Pablo Beach”

Hi, Shaun Murphy here, and we’re introducing you today to Casey Bulgin who is a Certified Financial Planner with Peck Bulgin Wealth Management at Raymond James here in Jacksonville. Casey, how are you doing today?

Casey: I’m doing good. Thanks for having me. I really appreciate the invitation.

Shaun: Thanks for being on our show. Casey’s an Investment Advisor for 17 plus years. He’s a CFP and AEP. He’s a Vice President of Investments with Raymond James here in Jacksonville. Casey, can you expound a little bit at what those acronyms mean?

Casey: Sure. The CFP is a Certified Financial Planner. The AEP is an Accredited Estate Planner. So the “alphabet soup” behind my name.

Shaun: Okay. Can you give us a nutshell what you do here with Raymond James here in Jacksonville?

Shaun: I’m sure you’re dealing with a lot of different questions with the stock market and Investments these last several weeks. If you don’t mind, can I ask you a couple questions that I’ve seen in the news, and maybe, you know, might help people realize what’s actually going on?

Shaun: I’ve seen, is there a change of date or is it too late to invest in an IRA this year for your tax year of 2019?

Casey: Good question. The short answer is they did push that back so they pushed back the tax filing deadline from April 15th to July 15th, and in doing that they kick back the deadline for for IRA contributions – Roth and Traditional so short answer, Yes, you still have time to make those those contributions.

Shaun: Okay, great. So what type what other options to do we have as taxpayers other than the Roth or the Traditional IRA? Is there anything else out there? An employer-sponsored.

Casey: So, if you’re at a company, obviously that has an employer-sponsored 401K simple IRAs, SEP-IRA, you know 401K is the big one. A lot of folks don’t know that they have it, and they also don’t know that there’s other features there, some of them have Roth Provisions in there. So in getting familiar with what your employer-sponsored plan is a really good step and it’s a worth a call to who’s ever handled in that plan just to see what the options the options are there. Most people are not are not maxing that out in some cases.

Shaun: When someone has an employer-sponsored plan and they may be a client of yours do you ever get involved in helping your client or that employee that maybe not understand the vocabulary or what they’re talking about?

Casey: Yeah. A lot of it really is educational, you know, so trying to explain, a lot of folks look at a 401k and say I don’t want to do that. It’s too risky. You know, the 401K really and the IRA is is just an account. It’s just an account you determine what you would like to invest in inside of that. So we do spend a lot of time not only with the the owners of the company but also the individual participants which tend to get overlooked sometimes in the general scheme of things. But to answer your question. Yes.

Shaun: Fantastic. I’ve got another question here. Will the government infusion of cash help the stock market, or a 401K, or my 401K, or your 401K? How do you see that coming with all these trillions of dollars?

Casey: Great question. The short answer on that is ‘hopefully’. We don’t know. Only time will tell on that. But you know, when you look at government intervention, it’s usually going to come in one of two ways. You get monetary stimulus – you hear the word ‘stimulus’ all the time and we get monetary stimulus and we get fiscal stimulus. Monetary stimulus is just what it says it is – monetary, its money. They are trying to increase the money supply. So monetary stimulus is going to be driven largely by the Federal Reserve. So you’re going to see, their chief tool on that is lowering the interest rate, So they’re going to lower the interest rate and in doing that what they’re trying to do is spur borrowing. You know, it’s a lower cost of borrowing. So that’s what they’re trying to do by lowering interest rates. You see that on the news a lot the other tool that the Federal Reserve has and Central Banks have is ‘quantitative easing’. You hear that one, too. That’s basically them buying government securities. So they’re injecting cash that way into the money supply. So the Federal Reserve and the Central Banks are in charge of monetary stimulus. We’ve already done both of those this year with the aftermath of COVID-19 on the other side. The other kind of tool for intervention is fiscal stimulus packages, and that’s what the two trillion dollars was that just released a couple weeks ago and that had a ton of stuff to it. So it was a package – a fiscal stimulus package – and it largely had the chief item in there, which everyone sees as the stimulus checks that were, in the process of being mailed out right now and that’s exactly what it is. It’s trying to stimulate the economy through money. Fiscal stimulus is basically government spending so they have to get Congressional approval to do it. And that’s where we are. But the the chief tool there was the stimulus checks, but there were a ton of other things there that were added in which expanded unemployment. They made it longer. They waived the waiting period. You can be on it longer. There’s a huge loan program for small businesses. They added relief for larger businesses. So employers that were under and over 500 employees with potentially forgivable loans. They’ve waived student loan payments. They waived the required distributions out of IRAs. They’ve made it a lot easier to get money out of your 401K, and we’ll go over that a second. Access to money, penalty free. So there were a ton of things that they did that don’t get a lot of press that were basically added to stimulate the economy and get people circulating money again. One thing I just want to mention you have to remember to keep in mind also, when you you quantify, you know, will this will this affect my 401K, basically, with this big money is – the stock market is not the economy. The stock market is a leading indicator. It is discounted future earnings. When you buy a share of Apple stock, you’re not buying all the iPads they’ve already sold you’re buying all the iPads they’re going to sell. So you have to keep that in mind. Arguably, we’re in a recession. Some people say we’re already there, we won’t know that until after the fact, usually, because of how the data is reported. But the stock market tends to bottom out before we’ve actually exited the recession because it’s a leading indicator. So long answer for you there.

Shaun: That’s okay. Fantastic. What about the 401K? I mean you mentioned it. Are people able to borrow penalty-free from their 401Ks now during this time?

Casey: So yeah, that was very big for active employees. Now, if you’ve been let go and you’ve been laid off, and you’ve now separated from service, you can take out money out of that retirement account where before – you still have to pay taxes on that money. So if you withdraw money out of that, you separated from service, and then you go and you take money out that used to have a 10% penalty to it if you’re under 59 1/2 years old – they waived that. Pretty huge things that don’t get talked about a ton. Well that could make a huge difference if someone loses their job and they’ve got $100,000 and you know, that could pay their mortgage, their bills, until they’re able to. If they’re out of work for six months or whatever to be able to survive.

Shaun: Absolutely. Okay, maybe one other question here. That’s kind of where I was going and someone loses their job. Will they get penalized to take their money out of these retirement accounts? So can you expand on that anymore or did you pretty much cover that?

Casey: That’s pretty much it. They will not get penalized now. There is a small provision there that they have to be affected by the virus. But if you lose your job that’s considered affected. But, even if you haven’t lost your job, and there’s some verbiage in there about childcare. So if you’ve been financially inconvenienced, because of childcare, that you provide for a child and that affected you then you could have this checkbox checked. You want to check with your CPA on that or your financial advisor, and it’s worth a call to the 401K providers sometimes too.

Thanks to Casey for stopping by “A Minute with Pablo Beach“. You can contact Casey directly at 904-348-5417, email him, or visit his website. 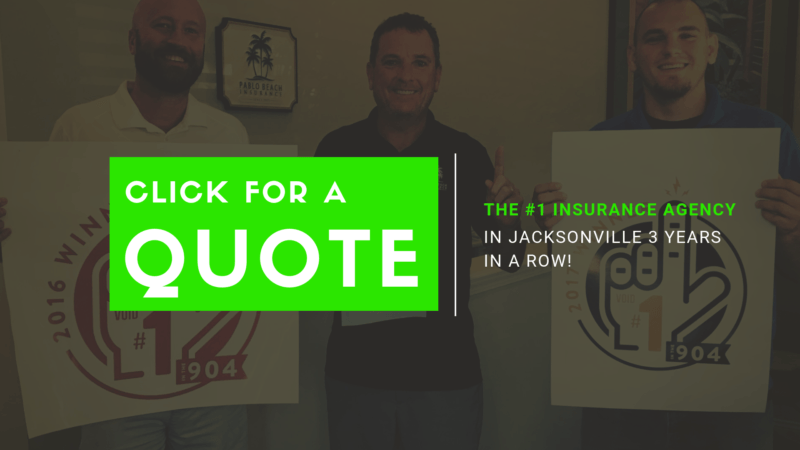